At the dawn of the 10th of Muharram, 62 A.H. (680 AD.) after Imam Hussain (A) led his followers for the morning prayer he wore the coat of arms of his grandfather, the Apostle of Allah (SAW), and put his turban on; he wore his father's sword, "Thul-Fiqar" or The two-pronged.

He then addressed his followers, stating with praise of and thanks-giving to Allah, "Allah has destined that you and me shall be killed today. I, therefor, would urge you to be resilient in fighting".

Thereupon, he mobilised his band for war. They were, as later related through Imam Mohammad al-Baqir (A), 45 horsemen and 100 foot soldiers. He made Zuhair bin (son of) Alqain commander of the right flank, Habib bin Mudhahir the left flank, and his household in the centre; he en-trusted the bearing of the standard to his brother Al-Abbas (A). The troops gathered in front of the tents where women and children were housed. He ordered the digging of a trench, surrounding the tents enclosure from the back, filling it with firewood during the night of the tenth of Muharram, setting fire to it when fighting broke out so that it may serve as a back buffer between his fighters and the enemy's army. 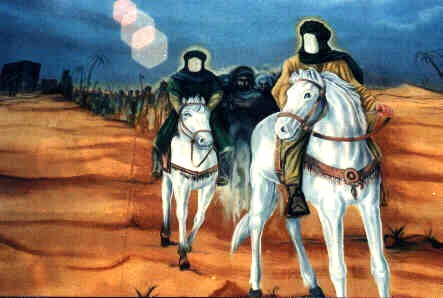